Attractions and things to do in Moraira, Spain. Moraira on the Costa Blanca in Spain is an exclusive coastal city that caters to the discerning tourist. You will not find any tall hotels or apartments here, just clean beaches, well-kept streets and many good shops and restaurants. Moraira is a resort that has developed a lot over the years from a small sleepy fishing port to a popular tourist area. There are plenty of things to do in Moraira, and here we will show you top sights and attractions in Moraira.

Things to do in Moraira

In Moraira there are plenty of activities and things to do for the whole family. Here we will take care of the most important and give you tips and advice on things to do in Moraira, Spain. If you rent a car in Moraira, you can also take a tour and visit the nearby cities of Alicante province. 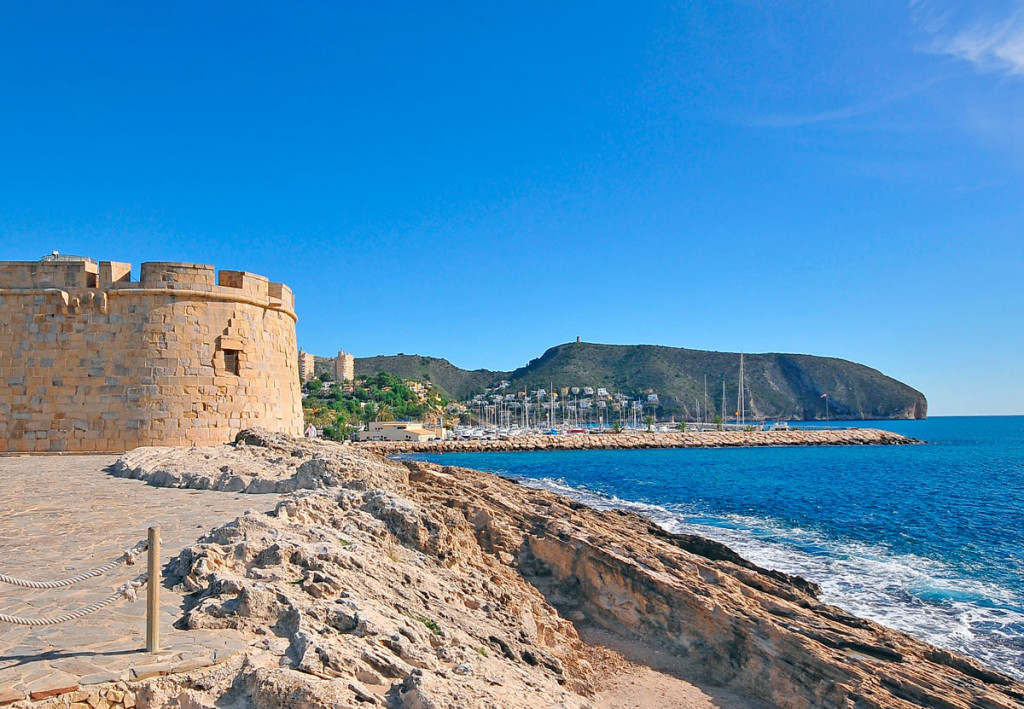 The castle of Moraira is an 18th century fortress on l’Ampolla beach in Moraira. The Bourbon royal coat of arms hanging over the front door, describing the year construction work was completed. It has been documented that Castillo de Moraira was planned by Juan Bautista Antonelli to protect the coast from the 16th century invaders, but, according to a plaque at the entrance, it was not completed until as late as 1742.

The Friday Market in Moraira is one of the largest local markets on the Costa Blanca. At the local market in Moraira you will find a wide range of products. All fruit and vegetable stalls can be found in the northernmost lane, accompanied by other foods like Turrón & Sweets, herbs and spices, nuts, eggs and cheese, as well as some flowers and plants. Furthermore, there are clothes, swimwear, lingerie, blankets, bed linen and towels, and ceramics. Kitchenware and paella pans, sunglasses, (hand) bags and leather, lots of toys, shoes, jewelry and watches, shampoo and shaving cream, yes the list is long! There is also a corner where you can sit down and have a drink in the shade or go to the other end and get some churros. Read more about shopping in Moraira 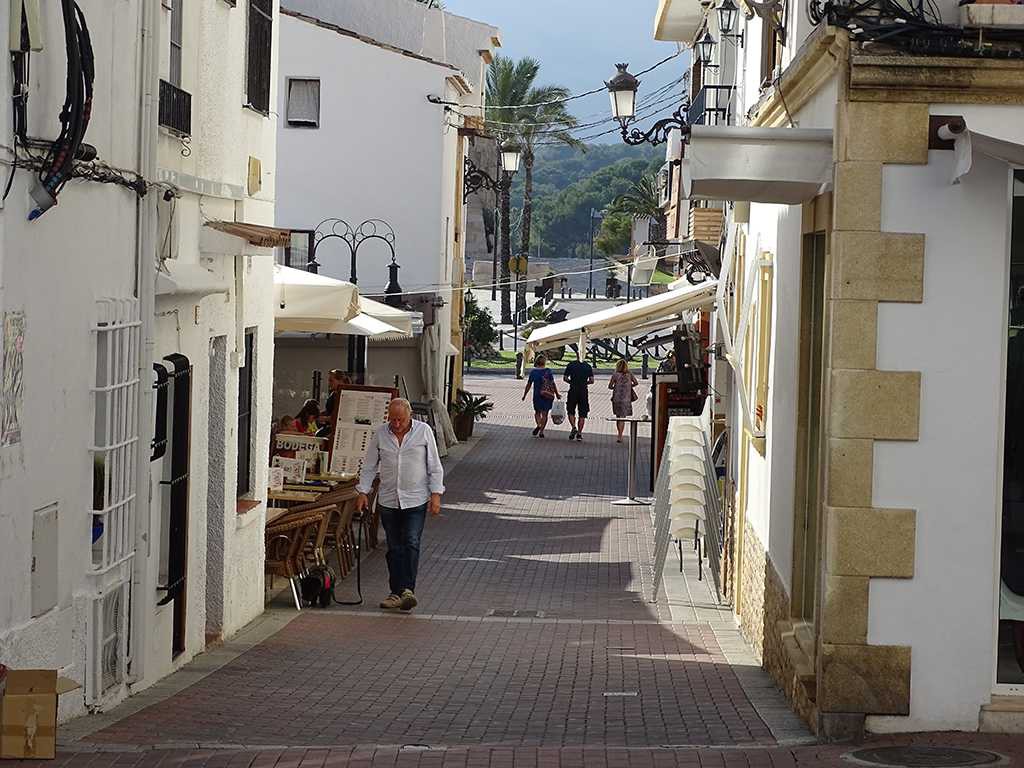 Start on the main street, known as Dr. Calatayud, and visit the local church built in the 19th century. Its special doorway with its arches and piers is a typical example of the region’s architecture known as Riu-Rau. Go down Almacenes and you will come to Playas y Mar street, which is the oldest and most picturesque street in Moraira. After stopping to take pictures, you will come to the old backing wall called Margenot, which protected Moraira from the stormy ocean. If you do not want to go, you can take a tourist train that goes along the main streets, past the gate and towards the El Portet beach.

The beaches of Moraira 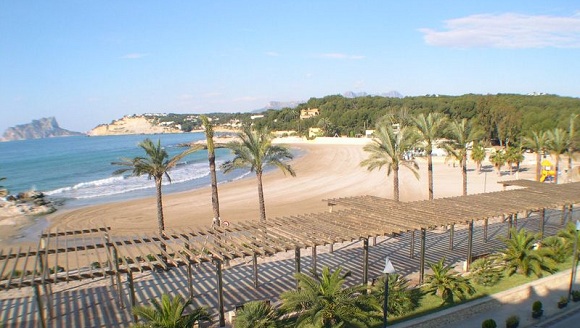 With a coastline of eight kilometers, with many cliffs and crystal clear waters, Moraira has a wealth of beautiful beaches to choose from. There are mainly two beaches in Moraira: l’Ampolla next to the castle and El Portet on the other side of the harbor. Both are sandy beaches and are perfect for children. L’Ampolla beach has a play area, toilet and lifeguards in the summer season and a beach bar that has an associated restaurant. El Portet is tall and thin beach and is supported by a variety of places to eat and drink. Other beaches found along the Moraira coast are La Cala, Platgetes and L’Andrago. In season as well as out of season the beaches are great to visit as there is plenty of space for ball games and picnics. Read more about beaches in Moraira

Activities and Sports in Moraira

There are plenty of things to do in Moraira for the whole family, whether you are on holiday or staying here year-round. Activities in Moraira include go-karting, fishing, golf, tennis, squash, boat rental and charter, horse riding, scuba diving and bowling. 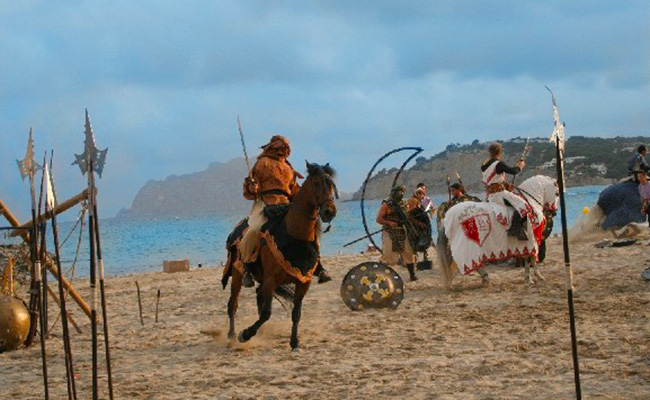 The “war” between the Moors and Christians is without doubt one of the best things you can see during a local fiesta. An invasion of the Moors is drawn here, while the fireworks are milling over the water and exploding in the ocean. It all takes place on the 3rd weekend in June. Other fiesta in Moraira: The Byfestivalen is to commemorate the patron saint of Moraira “La Virgen de los Desamparados” and “La Virgen Carmen”, who was the protector of the city’s fishermen. The festival will be held July 15 and July 16 each year. La Fiesta del Moscatel is held in late August in Teulada and is named after the local moscatel grape used to make Mistela wine.

The Moraira restaurants offer a variety of international dishes: Spanish, English, German, French, Italian, Greek, Moroccan, Indian, Chinese and Thai. Then you’re sure to find something to tempt you. There is also a selection of local fresh fish at many of the restaurants. And of course, in real Spanish style, children are welcome at Moraira restaurants and bars, and most menus offer varieties of main courses for children. Light snacks, drinks and ice creams are readily available in Moraira bars spread across the coast and offer stunning sea views. In the middle of the two Moraira beaches, the puerto is still a thriving fishing port and also home to some high class yachts sailing in the Mediterranean. Relax in the nearby bars or terraces. Read more about Moraira restaurants